This article is an adaptation of a technical document from the development of Fallout 3. As such, it may contain some features or functionality not available in the retail release of Fallout 3, but is included here for education and posterity.

The purpose of occlusion culling is to find geometry that has zero effect on the final render buffer because it is behind other geometry, and eliminate that geometry as early in the render process as possible to reduce wasted CPU and GPU time.

An Occlusion plane is a surface created and placed in the editor. A computation is done every frame testing each multibound shape against each occlusion plane. If a multibound is occluded, it is not rendered.

This example tries to show how this system would be applied to the cell ChevyChaseMetroEntrance (Found in DCworld01). Here we are working on two specific areas that have a lot of detail, they are blocked out in Multibounds, drawn here in blue. Also, an occlusion surface (in green) has been added in the building to the right, as it can be used to block many objects behind it. 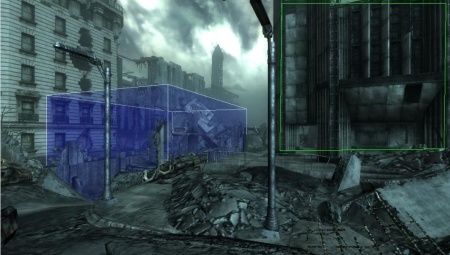 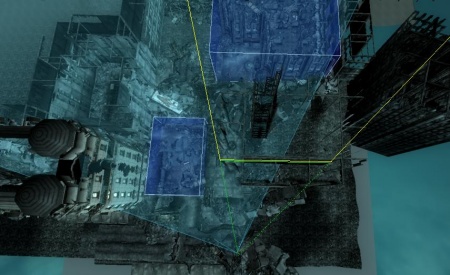 Both multibound shapes pass the frustum culling test, as they are both at least partially within the view frustum volume. Normally, this would mean that we would render all the contents of both of the Multibounds. However, when doing testing the further multibound shape against the occlusion frustum volume, we determine that it is completely within the occluded space of our sample occlusion surface. Based on this we completely skip over that multibound and all its contents during geometry accumulation, removing them entirely from the rendering pipeline and saving a large amount of time.

Since Multibounds are 100% static and the camera only changes once per frame, we compute their occlusion before render accumulation begins - hopefully while other pre-rendering processing is being done in another thread (AI updates, non-player collision resolving, etc). Even if the contents of a multibound change, the visibility test remains the same and occlusion will correctly affect the new contents.

Because each occlusion surface must be tested against each multibound shape, we want to limit them to areas where they'll have the biggest impact. Level designers use the flow of the level and its varying detail level in order to place occlusion surfaces and Multibounds to produce the most efficient occlusion. Too many or poorly placed occlusion surfaces and Multibounds and the game will waste time doing unproductive calculations. Too few (or, again, poorly placed) and the game will waste time rendering geometry that doesn't affect the final render buffer.

While in-game, entering 'TFC 2' in the console (~) will force the renderer to continue to render exactly what was visible at that frame - but will allow you to still move the camera around. Multibounds and occlusion planes become visible (along with other relevant debug geometry) and are color coded to help visualize the state of those systems.

A large light-blue pyramid is the view frustum, with some error since the front clipping plane is not actually shown.

Frustum culled Multibounds (outside of the camera's viewing volume) are dark blue.

Multibounds that are visible and not occluded are green.

To further refine the ability to define spaces and occluders, the GECK introduces more sophisticated spatial organization with portals/roombounds. Portal spaces are enclosed spaces which have very few visibility connections (portals) to other spaces. The portals can connect to other portal spaces, or can connect to the open, unbounded world.

In these examples, space A has a single portal a which connects to space B. Space B also contains a (a two way portal), and also b, a portal to the unbounded world. For all these examples, the view point is within space A.

Portal a is within the view frustum so space B is accumulated and rendered with the projected volume of portal a intersected with the view frustum. Portal b is not within this view frustum, so this is as far as rendering proceeds. And below you can see the resulting frustums used for each room with BSCompoundFrustum.

This case is similar to that above, except that portal b is visible, so the unbounded world is accumulated using the projected volume of portal b intersected with the view frustum. And below you can see the resulting frustums used for each room with BSCompoundFrustum.

This illustrates how occlusion planes can interact with the portal system. In this situation, while both portal a and portal b are within the view frustum, portal a is occluded by an occlusion plane, so space B is never accumulated. Note that portal b is not actually occluded, but because portal a is occluded, we don't even need to test portal b, as none of its contents or those it connects to can possibly be visible. 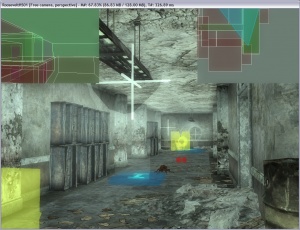 The GECK equivalent of TFC 4

By default, occlusion culling is disabled while using the GECK. The keyboard shortcuts 3 and 4, mentioned above, enable a preview of culling in the editor. Note that the view modes are not very useful in conjunction with each other.

This does not appear to be available or enabled in the consumer version of the GECK.