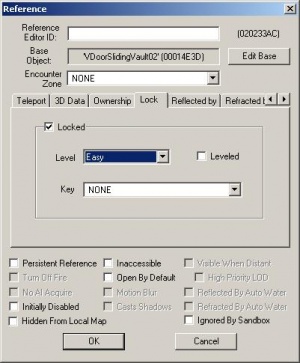 The Reference Properties window of a Door object

A Reference is not the same thing as a Ref Variable. A Ref variable can contain either an Object or a Reference.

A good amount of scripting functions are performed on a Calling Reference.

Only available for Audio Markers. Fallout New Vegas only.

Imposters are heavy on performance and should be used sparingly. Generally used for very large objects. Also used for animated objects or meshes that normally do not have LOD objects. Note that animated objects will stop animating when a certain distance from the player and will not animate again until the player leaves the distance ring where the animation stops. This seems to be the third ring of cells from the object and appears to be a bug in the engine.

Only available on markers and furniture.

Only available on doors.

This reference can be linked to another door reference anywhere in the world. The link is bidirectional. The other door reference is automatically set to point back to this door. Setting a teleport also creates a yellow teleport marker at each door. This is where the teleported actor will be placed.

Only available on containers and doors.

The NPC or Faction that owns the object can be specified.

Only available to Actors.

Points to the Container where Items they buy will be placed. This prevents the player from burdening the NPC to the point where he can't move. Generally this is in the cell where the merchant resides and the container is linked to the master container in the merchant container cell.

Only shown on references whose base objects are leveled creatures or leveled NPCs. It specifies a level setting for the reference, which uses the reference's Encounter Zone to determine which base actor to use. If there is no encounter zone, which is common in the wasteland, the player's level is used.

A collection of miscellaneous values used by a wide variety of object types.

Water that reflects the object. Reflecting water may be selected by cell and object, or by directly clicking on the reference water.

Water that refracts the object.

List of water plane references that reflect light from a light reference.

Appears to be unused/incomplete implementation by Bethesda. The reference added to the list needs to be a Texture Set that's been dragged into the render window; the Texture Set is represented by a light blue arrow, and the only place this was used was in Vault101b. However, no objects use it as a decal.

A reference can have a linked reference, which is set in this tab.

Chains of linked references are commonly used to set up patrols (see Patrol Package). They can also be useful for scripted purposes (see GetLinkedRef).

A reference can be set up to have one or more Activate Parents. These are references which will "pass on" an activation to this reference when they are activated.

A reference can have a parent reference, which is set in this tab. When the parent is enabled or disabled, so are all its children. If the Set Enable State to Opposite of Parent box is checked, then the reference is enabled when the parent is disabled and vice versa. Parent relationships are also used by trigger/trap references and other generic related objects. (See GetParentRef.)

This can be useful in instances where you are enabling or disabling a larger number of objects at once via script. You can simply enable or disable the parent, and shorten your code considerably.

Note that references with an enable parent cannot be disabled/enabled independently of their parent -- their disable/enable state is always determined by their enable parent.

Note that if an object has an enable parent, the initially disabled flag is invalid and should not be checked.

Setting an object's enable parent to the opposite of the player is inadvisable in the Fallout 3 and New Vegas engines and should not be done, particularly on moveable static objects or in plugins overriding an ESM. Doing so can cause havok issues in cells.

This refers to the color emitted by the object; most commonly (only?) used by glow effects which need to look a certain color.

If the emittance is set to using the interior light drop down list, then the color will not change. However, using the exterior light setting, the emittance will change in accordance with the daylight of the region chosen. (ie, Megaton's lights have glow effects that use an inverted daylight emittance, so they appear to turn on at night, and turn off in daylight)

A reference can be assigned to appear within a multibound. A multibound can be an exterior multibound box, or an interior roombound. Normally a reference appears inside the bound that their pivot point is in. This can be overridden by selecting the bounding volume in the reference window by pushing the 'Select Reference in Render Window' button. This is useful for objects which cross two multibounds and you want it to appear in both of them. You can duplicate the object and assign each duplicate to a separate multibound which will make the object appear to be inside both when the player is moving through the area instead of being render culled.

Only shown on references whose Talking Activator base objects are Radio Stations.

To move references from one space to another:

Select the references you want to move in the Render Window. Use Ctrl+C to copy the refs. This will put everything you want to move on the clipboard (just like it does for a paste). Then load up the area you want to move the refs to and hit Ctrl+M to move them to the new space. You will get a confirmation message box before the operation is performed. Once you confirm the move, the original refs and anything tagged to them will be moved to the new location. If a collection of refs is moved at once, they maintain their orientation and spacing (just like they do in a paste). Ctrl+V still performs a normal paste operation.

When moving, make sure you use Ctrl+C to copy and not Ctrl+X to cut to get the refs to the clipboard. Ctrl+X will mark the refs as deleted, and while the Move operation will attempt to clear this flag, any links to the reference may have already been broken by the original delete.

In Fallout, objects stored inside of the inventories of actors or containers are not references. However, it can be useful to treat them as references in order to modify them. NVSE provides this functionality through the use of "inventory references", which are temporary references representing a stack of one or more items inside of a container. These references are only valid for one frame.