The Zone Level is a value calculated the first time the player loads any of the Encounter Zone's cells. It is stored permanently on the Encounter Zone and is never recalculated. If the player returns to the zone after gaining several levels, the zone's level remains the same as when he first visited. 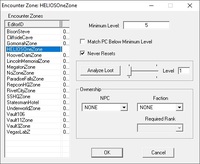 Encounter Zones are listed in the World menu (and the WorldObjects section of the Object Window). The Encounter Zone form has the following fields: